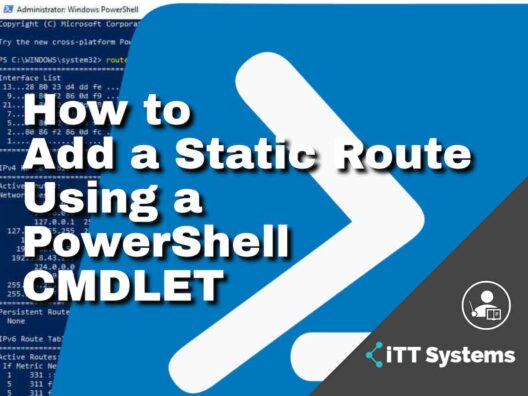 What is Static Routing?

Routing is a complex process as it involves routing every data packet through the appropriate channels as it traverses from its source to destination. This is often done based on a set of rules or protocols that determine the most optimal path for a data packet under different circumstances. These rules are contained in a routing table.

A routing table is nothing but a set of entries that tell a router where it should redirect the packets that come to it. A routing table looks something like this:

In static routing, these entries in the routing table are fixed and don't change automatically.  These entries are entered manually by an IT admin, and hence can be changed only when the organization deems it necessary.

Just to understand the difference, dynamic routing is the process where a router determines the next best path for a packet based on the prevailing conditions such as traffic levels and available communication paths. Also known as adaptive routing, this process is not fixed and the router makes a decision on-the-fly.

A mere glance at the two routing options clearly shows that dynamic routing is far more flexible and has the potential to make the optimum use of network paths when compared to static routing. In such a case, why even use static routing in the first place?

Static routing has many advantages and hence, works well in many scenarios. Some of the advantages are:

One of the biggest advantages of static routing is its impact on the existing resources. Since it requires only a minimum amount of CPU usage from the router, it does not add to the cost of operations. All that you need is one router that reads the routing table and sends the packets along the predetermined route. Even the routers don't have to be advanced for this routing. In all, static routing is the choice if you're money-strapped and can't afford to spend on smart routers.

The other big reason for companies to opt for static routing is the control they have over the entire routing path. Your IT admin determines the optimal path and the data packet simply travels along it. At any point, your IT admin will know the path in case something goes wrong. You don't have the same level of control in dynamic routing as the path is determined by the router, and this could change every time depending on the prevailing conditions.

Configuring a static route is simple and doesn't require a large team. A single individual can handle it for you, especially if you have only a small network. Further, the configuration process is simple and can be set up within just a few minutes. All this means your organization saves time, effort, and money when you choose static over dynamic routing.

That said, static routing comes with its share of disadvantages too, which are:

Despite these disadvantages, static routing is used extensively across many use cases. Let's now look at a few scenarios where they can come in handy.

Static routing is used extensively across homes and enterprises today because of its benefits and low overhead costs. Let's now see a few scenarios where they come in handy.

In PowerShell, cmdlets are code snippets that carry out a particular task. From a user/programmer's standpoint, it saves coding time and effort.

To add a static route, the “route” cmdlet is used. It takes the following parameters.

You can always check if this route is added to the table with the command, “route print”. This command displays the routing table and you can see the entry you just added.

To delete this route, simply replace the action parameter like this:

You can also create a new IP route with the New-NetRoute cmdlet. It takes the following parameters.

Here's an example of how you can use this cmdlet.

This cmdlet gets information about one or more IP routes from a routing table. It also comes with many parameters to filter the search results.

To get all the routes in a routing table, simply type “Get-NetRoute”. You can either filter the results manually or add parameters to do that automatically. For example, if you execute “Get-NetRoute -AddressFamily IPv6”, you'll see all the routes that are related to IPv6.

In all, these PowerShell cmdlets ease your task of viewing, adding, and deleting entries from a routing table.

Static routes are a part of the routing process that sends data packets from one destination to another.  These routes are fixed and don't change based on prevailing factors like traffic and bandwidth. Often, the static routes are manually entered or configured by IT admins, and the same can be changed or deleted manually when needed.

Though there are many ways to add and delete these static routes, PowerShell is the easiest option, thanks to its cmdlets that handle all the required functionality for you. We hope the above-mentioned cmdlets come in handy for you to manage your static routes.