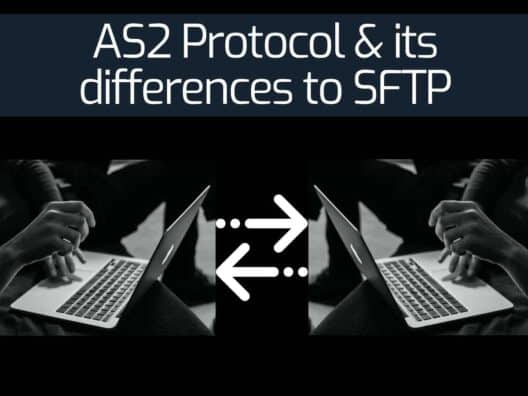 There are many file transfer protocols out there, out of which AS2 (Applicability Statement 2) and SFTP (Secure File Transfer Protocol) are pretty popular. Both these protocols are used for secure file sharing between users.

Organizations often feel perplexed about which one is better for their business-critical file transfers. In this post, we are going to dive into the differences between AS2 and SFTP. Which one to use? What are the features and functionalities of both protocols? And what makes one different from the other?

Before we get into AS2, we first need to understand AS1. AS1 stands for Applicability Statement 1, a file transfer protocol launched in the 1990s by a business communications company EDIINT.

We know that EDI (Electronic Data Interchange) is a format large organizations use to exchange their digital information related to invoices, purchases, etc., with other enterprises. EDIINT is an acronym for EDI over INTernet. Back in the day, large business organizations that commonly used EDI for electronic transactions were seeking a means to exchange EDI formatted data streams securely via the public internet. By the end of the 1990s, EDIINT established AS1- a file transfer protocol that can securely execute digital transmission over the public internet. It was a standardized technology, as recognized by various web standards entities.

The AS1 protocol used SMTP (Simple Main Transport Protocol) – a standard for exchanging communications. But AS1 was not widely adopted by the large IT organizations due to their uncertainty of switching from VAN networks to transfers over the public internet using AS1. Another reason for not using AS1 was the IT department’s fear that EDI traffic may overload corporate SMTP email servers, as AS1 is highly on secure SMTP packets. Furthermore, SMTP emails were not robust enough with innovative features to ensure on-time delivery of SMTP emails.

These instigated EDIINT to launch the new AS2 protocol in 2001 based upon HTTP protocol instead of SMTP. AS2 uses a secure HTTPS connection and enacts encryption of messages, referred to as AS2 messages. Hence, it allows real-time and direct communications for the transfer of EDI data between enterprises. The popularity of the internet and leveraging of HTTP together resulted in wide adoption and implementation of the AS2 protocol.

Unlike AS1, AS2 messages are compressed and signed; only then they’re transmitted over HTTPs through a secure SSL tunnel. Moreover, AS2 also allows you to request a receipt (Message Disposition Notification), which will alert the sender as soon as the recipient decrypts the received message. This process is often referred to as non-repudiation. The recipient will create, sign and return the receipt (also known as NRR – Non-repudiation of Receipt) to the sender after decrypting the message to legally confirm that the AS2 Messages were delivered without any tampering in transit. Even today, AS2 protocol remains a popular standard used by most retailers in E-stores and brick and mortar.

SFTP is firewall-friendly, as it requires only one port. It is one of the most uncomplicated protocols used for encrypted file transfer. Data transmitted between an SFTP server and client is secured via encryption compute and the use of public/private keys. All of these together offer robust protection known as public-key authentication. Or, users can also authenticate transmissions with an SSH key or a password.

The security layer of SFTP was developed by IETF (Internet Engineering Task Force). It encrypts the data-in-transit to protect it as it moves across the internet and then decrypts it as it reaches its final destination. One downside is that SFTP does not offer non-repudiation or message management like AS2 protocol. And interoperability is one of the main issues with SFTP.

SFTP is an excellent alternative to less secure manual scripts or FTP tools. In addition, it provides a higher level of security to organizations wanting to transfer files with their trading partners, employees, vendors, etc.

Popular platforms like SolarWinds and Files.com support SFTP protocol to help you with secure file transfers as well.

Main Differences between AS2 and SFTP protocols

Every IP communications protocol is built differently with different features. In addition, each of them may have a different approach to secure data transmission. For example, some protocols only focus on encrypting transport channels, whereas others secure the actual data, also known as payload encryption.

Non-repudiation is another security token that confirms that a trusted, claimed sender sends a packet.

When it comes to B2B, organizations seek a standard means to ensure that their messages reach their intended destination and are successfully decrypted.

4.  Interoperability and Ease of Use

IT organizations would want to choose a protocol that seamlessly creates a connection with the trading partners.

What is an AS2 Server?

AS2 Server is an application element that helps file transfers or electronic business documents with business partners via AS2 protocol. The AS2 Server commonly contains two functionalities viz. They are sending EDI documents/AS2 messages and receiving them. Apart from this, AS2 Servers need to support other features such as data-in-transit encryption, HTTP/HTTPS, digital certificates, digital signatures, and message management. AS2 Servers that are Drummond-Certified undergo a robust testing process to offer interoperability and reliability with other certified AS2 solutions.

Which protocol is best for organizations?

To conclude, IT organizations may have myriads of choices regarding secure communication protocols for EDI documents. Out of AS2 and SFTP protocols, the AS2 standard best addresses essential file transmission needs technical expertise and certificate administration. Nevertheless, due to its full-blown features, most large-scale retailers leverage AS2 to transmit EDI documents.

When to choose SFTP?

If you want to opt for SFTP for its simplicity, consider a reliable provider such as SolarWinds or Files.com to fill up the gaps in its functionality.

SFTP is extremely popular amongst IT organizations due to its firewall-friendly nature and strong authentication abilities. For encryption, SFTP supports Triple DES, AES, and algorithms like Blowfish. And for authentication, organizations wanting to use SFTP may test the connection using an SSH key, user ID and password, or both. Many SFTP solutions like SolarWinds and Files.com support two-factor authentication to provide top-notch security.

The rest of the business industry (other than retailers) prefers SFTP over AS2 protocol. Select SFTP if you want to leverage higher levels of authentication and firewall options. SFTP employs user ID/password or SSH keys or a combination of both to authenticate a connection between servers.

Moreover, SFTP is extremely easy to implement. It is a firewall-friendly protocol; hence, it requires only one port (commonly port 22) to initialize authentication requests, assign commands, and transfer information from organizational systems to other servers.

When to choose AS2 protocol?

Back in 2002, Walmart leveraged AS2 protocol as a standard for their EDI transactions, and other third-party vendors, retailers, and suppliers had to comply as well.

In other words, select AS2 protocol:

Apart from this, the AS2 protocol also offers the following benefits:

Lastly, solutions that use AS2 can attain Drummond Group Certification as legal proof of their compliance to the AS2 standard. This third-party certification validates that the certified AS2 answer is one of the best compliant solutions.