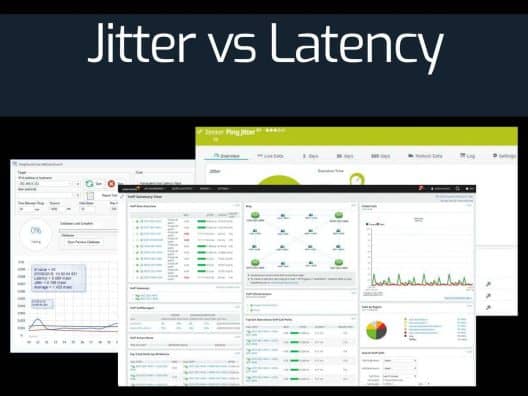 There's nothing worse than getting interrupted midway through an important update or a critical client call due to network issues. It's not only frustrating but can also impact your credibility and productivity.

So, what really is the cause of the problem? Could be anything, really though it's most often attributed to two terms that you hear often – jitter and latency. Many times, these two terms are even used interchangeably to mean network delays, but in reality, they are a world apart in terms of the underlying issue they depict.

That's why, we will drill down to the basics in this article to understand what these two terms mean, how they are different, and how you can fix them.

So, let's get started!

How is Data Transmitted in a Network?

Before we go into jitter and latency and the associated problems, let's briefly understand how data is transmitted through a network.

The data that you send is divided into small packets with their sequence numbers and these packets are sent over the network. The receiving device assembles the packets according to the sequence number and recreates the message.

The task of breaking down data into packets and reassembling them is handled by the protocol, which is usually TCP/IP or UDP.

A key difference between the two protocols is that TCP/IP waits for acknowledgment from the receiver whereas UDP waits for no such receipt.

As you may have guessed, the network problems begin when these packets are delayed or lost.

Now that you have an idea of how data is transmitted, let's look at the difference between jitter and latency.

Jitter is a situation when there is a delay in the transmission of data packets due to network congestion, and sometimes even due to route changes. Most often, this is the reason behind the buffering delays you see in video streaming, and high levels of jitter can even cause dropped VoIP calls.

At the same time, some amount of jitter is considered to be acceptable because it doesn't impede your browsing or watching experience. Typically, a jitter of 30 milliseconds or less is considered acceptable because it is hardly noticeable, but anything beyond this level affects your browsing experience including your calls. However, even higher levels of jitter are barely noticeable when you are downloading files.

To give you a real-time example, the time it takes for a website to load from the time you click the URL is latency.

Theoretically, data travels at the speed of light through the Internet, so there should be no delays. But in the implementation, it is often limited by the infrastructure, equipment, and sometimes even the distance between the source and destination computers.

The good news is there are many ways to reduce latency because, like jitter, it can impact your Internet experience.

On a related note, let's also look at a few similar terms like bandwidth and throughput, as they are often seen as synonyms of latency.

Now that we have a better idea of the different terms used in networking, let's look at the common causes of jitter and latency, ways by which you can monitor them, and some solutions to bring them to acceptable levels.

The first step to fixing network jitter is to understand its cause. Broadly speaking, there are three reasons for jitter and they are:

Now that you know the possible causes, let's look at some ways to fix this network jitter and keep it within acceptable limits.

Most times, the solution will depend on the cause of the problem. Here are some board solutions to fix network jitter.

A good way to reduce jitters is to use something called a jitter buffer. Many VoIP today implement this solution to prevent dropped calls and delayed audios.

The idea with this buffer is to intentionally delay the incoming audio packets to give enough time for the receiving device to receive and sequence the data packets so that the user faces little to no disruption in the call.

That said, these jitter buffers are tricky to implement. If you have a small buffer, then there's a high chance for the additional data packets to get discarded, thereby affecting the overall call quality. On the other hand, if the buffer is too big, it can cause delays in conversation and impede the experience.

A good way to know the cause of jitter is to do a bandwidth test, where files are sent over a network to the destination, and the time taken for the destination computer to download the files is calculated. This gives an idea of the speed of data transfer between the source and the destination.

It merits to note that some VoIP devices operate at a much higher rate, typically at 5.8GHz when compared to the normal 2.4GHz, and this could increase jitter across your network.

Moving on, let's look at the possible cause of latency and some solutions to fix it.

Latency is measured in milliseconds and is often referred to as the ping rate. In the ideal world, we want zero latency, but in the realistic world, we can stick to low latency levels. Let's see what causes these delays, so we can address them accordingly.

Distance Between Source and Destination

One of the most profound reasons for latency is the distance between the source and destination computers. For example, if you live in Boston and request information from a server in New York City, you're sure to get it quickly. But what if some information has to come from Seattle? There will be a delay!

But these delays are so small that they are not even significant. However, what exactly happens is that the farther the distance, the data packets have to travel through multiple networks and hop among many routers. Even if one network is congested or if there's an old router, it could impede the speed of travel. This is why distance has such a big bearing on latency.

To overcome his problem, service providers store the same data across servers located in many cities around the world to service requests from anywhere quickly. Still, that hasn't completely addressed this problem.

If the distance is one side of the coin, the type of data requested is the other. Generally speaking, just text packets are a lot quicker than bandwidth-heavy content like videos because the former can travel quickly even through congested networks.

Older versions of browsers and operating systems tend to be slower because of the limited CPU and memory. So, if the end user's device is old, there may be a limit on how much data it can process simultaneously and this impacts the viewing experience too.

How can you fix high latency? Let's see.

The solution depends on the cause of the problem. But the first step is to check the rate of latency in transmission. To do that, go to Command Prompt and type “tracert” followed by the destination (typically a website like www.google.com).

This command will list all the routers that the packet travels through along with the time (in milliseconds) it takes to hop from one router to the other. The cumulative time of these individual hops is your overall latency. This will also give you a better idea of where the delays happen, so you can take the appropriate measures.

Some of the possible solutions are as follows.

Subnetting is the process by which you group endpoints that often communicate with each other. In this sense, you're partitioning the network into smaller and frequently communicated groups, thereby reducing bandwidth congestion and latency. This process also makes your network more manageable, especially if you have one that spans multiple geographical areas.

As the name suggests, traffic shaping is a strategy you use to control the allocation of your bandwidth, so the mission-critical aspects of your business have continuous and uninterrupted access to the network.

Load balancing is another common strategy used to efficiently distribute incoming network traffic across a bunch of servers at the backend to better handle the additional activity. You can imagine a load balancer as a traffic cop that sits at the entry point of the packets and routes them to different servers that can handle them. This distribution is done to maximize bandwidth allocation, speed, and utilization.

Thus, these are some of the common strategies used to reduce latency. Many times, these solutions address the problem of jitter as well, especially if the cause of both latency and jitter are closely linked.

Finally, let's take a look at some common tools that will help to measure both jitter and latency, and give a solution to fix both.

We hope this information gives you a comprehensive idea of what network latency and jitter are, their causes, solutions, and possible monitoring tools.

Based on our discussion so far, it's clear that the solution depends on the problem, so this means understanding the root cause of the problem quickly can help to address these issues faster. This is also the difficult part as it can get unwieldy and sometimes, even impossible to look at the route of each data packet that enters or exits a network.

Thankfully, many tools automatically monitor latency and jitter and give you the cause of the problem. This makes your job easy as all that you have to do is implement the appropriate solution to fix the problem.

Here’s our list of the best Tools to Handle Jitter and Latency: 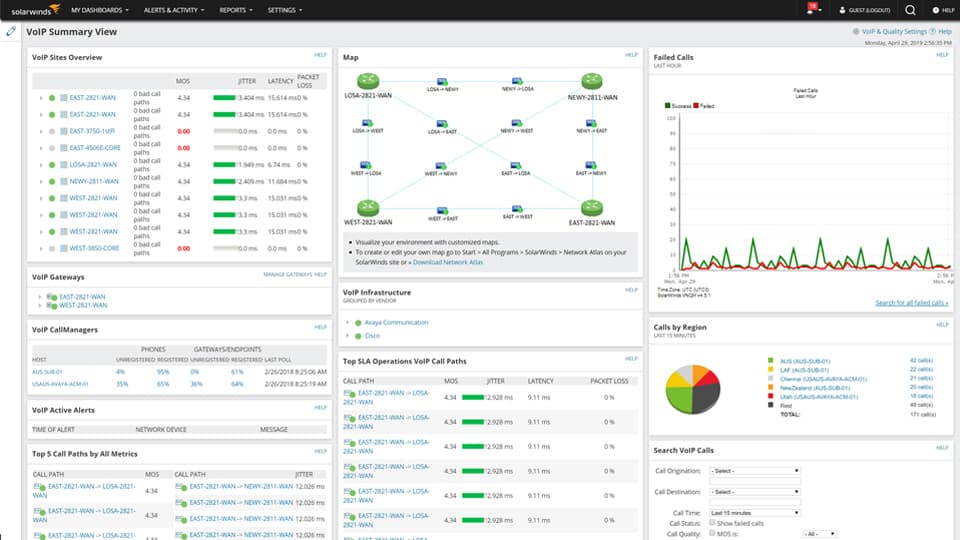 This tool starts at $949 and offers a fully functional 30-day free trial. 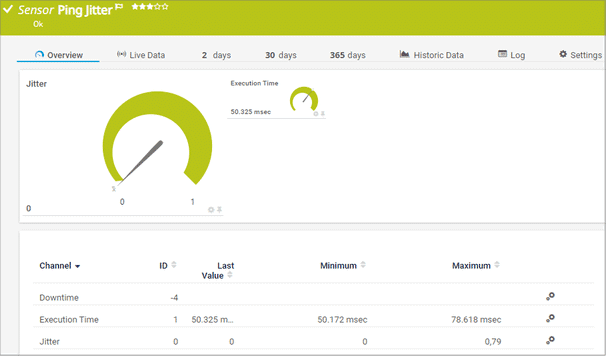 Paessler Router Traffic Grapher or PRTG in short is a sensor-based monitoring tool where there's a sensor to monitor each metric you want. This tool gives you the flexibility to add or remove as many sensors as you want across devices and you're charged based on the number of sensors you use per device.

Choose a plan depending on the number of sensors you'd need and before that, you can also try this tool for free by clicking here. 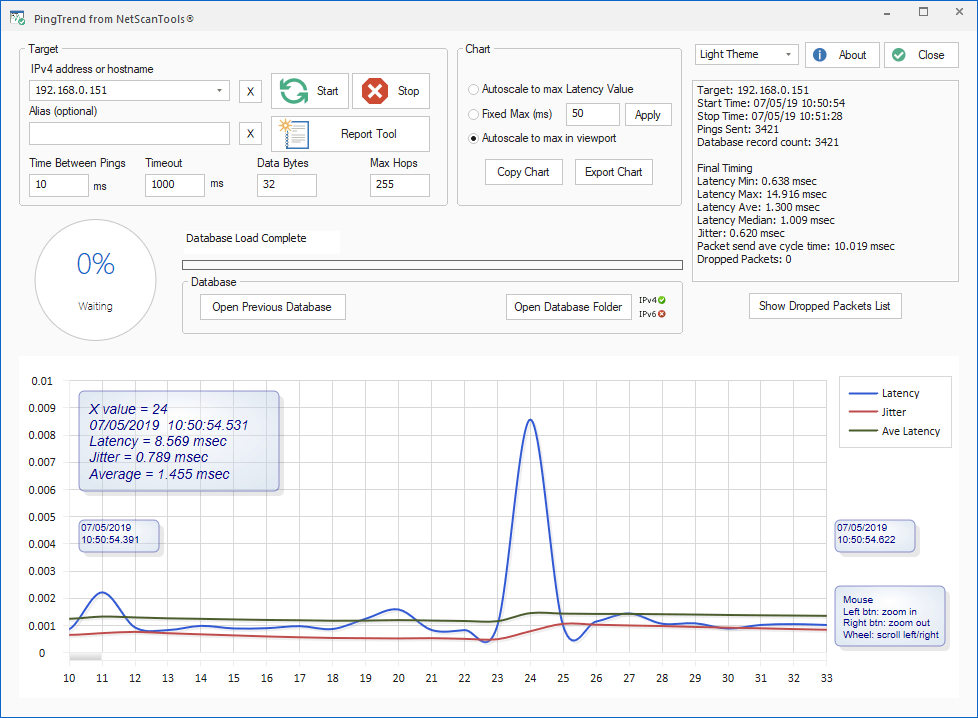 PingTrend from NetScanTools is a high-speed packet latency and jitter test tool that sends ICMPv4 packets at 5ms repetition records the latency and jitter and displays them in visually appealing reports. These insights help you to quickly understand and fix the problem.