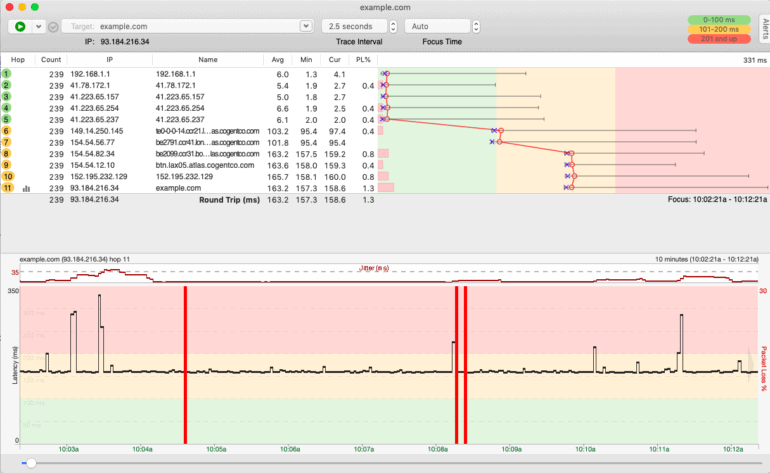 In this article, we will be reviewing a network troubleshooting tool called “PingPlotter”. Just like the name says, PingPlotter plots ping (and traceroute) data on a graph over a period of time.

The major difference between this tool and the ping/traceroute utilities is that PingPlotter comes with a sleek and stylish interface.

We will see this later in the article. For now, let’s get some definitions and technical points out of the way.

Ping is one of the most important tools for monitoring and troubleshooting a network. Basically, it answers the question, “Is this destination host available/alive?”. It also provides answers to two other questions:

Traceroute provides information about the path to get to a destination i.e. the hops (or devices) along the path from sender to destination.

So while ping will only tell you whether a destination is alive or not, traceroute can provide added information about issues on the path.

Warning: Ping and Traceroute should not be considered 100% accurate. Various things (e.g. filtering, firewalls) may prevent them from working correctly.

Now, enter the world of PingPlotter.

Like we already mentioned, it is a tool that combines the features of ping and traceroute (along with other features) in a nice interface and is a great ping monitor for your devices. It is supported on Windows OS, macOS, and iOS.

It can be downloaded here and gives you a 14-day free trial on the Professional edition.

You can visit this link to compare the features available on the different editions – You can also see them below: 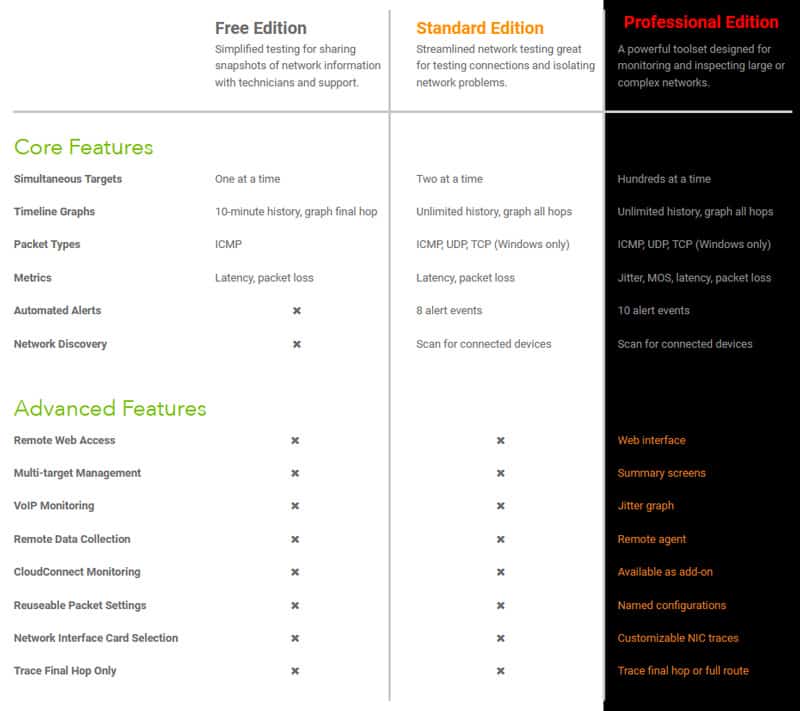 Note: In this article, we will be running the Professional Edition based on the 14-day free trial. We will also be using a macOS even though the one for Windows will be broadly the same.

Installing PingPlotter is pretty straightforward. All you need is to download the appropriate installation file and install it like you would any other application. For macOS, you have the option of moving it to your ‘Applications' directory. 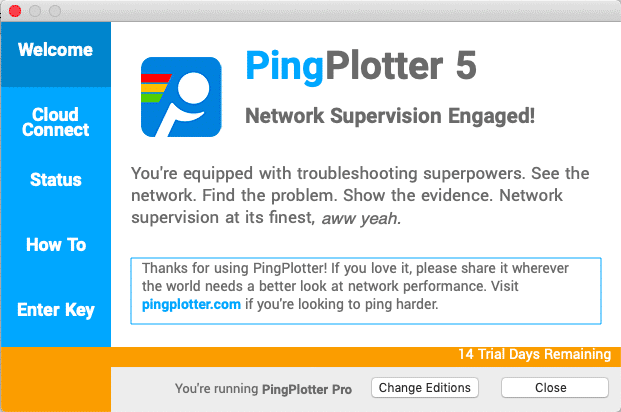 Even if you don’t read any documentation, you probably know to enter the target IP address/hostname in the box provided and click on the GREEN BUTTON to start the “plotter”.

For this article, I ran a trace to “example.com” over a period of 5 hours. Let’s take a look at the output: 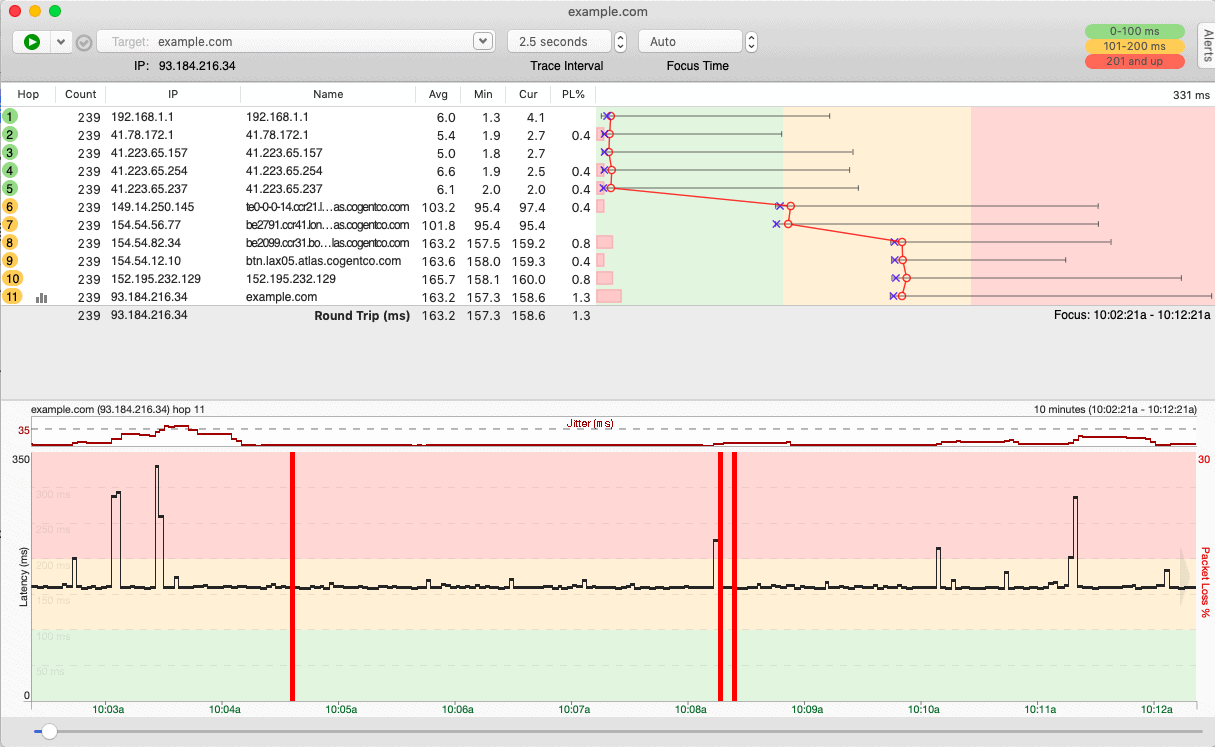 Below you'll find a description of what each section of PingPlotter does and how to interpret the data that it gathers for the connection your testing.

This is where you configure your setup and it contains the following:

This part of the interface looks very similar to what you get when you run Traceroute. Basically, it provides all the hops along the path from source (the computer running PingPlotter) to target, the response times for each of those hops, and if any packet was lost for each hop.

Note: Packet loss is normal on a network, especially one that is shared by many users. The problem is when there are too many lost packets.

The colorful part of the Trace Graph (called the “Latency Graph) just plots the response times and packet loss in a nice looking graph.

The colors are based on the intervals you configured in the Target Bar above. There are also some icons used in this graph that are worth talking about. Consider the image below:

Keep in mind that the Trace Graph is affected by the “Focus Time” setting in the Target Bar. Leaving the default setting of “Auto” for the Focus Time, the Trace Graph will display data for the current focus in the Timeline Graphs (discussed next). However, we can change this value to view data for different ranges e.g. 5 seconds, 60 minutes, All, etc. 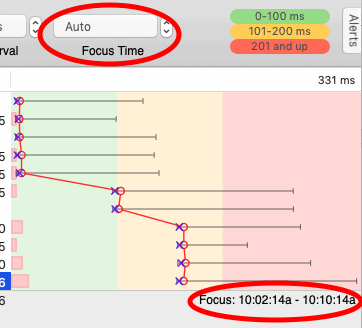 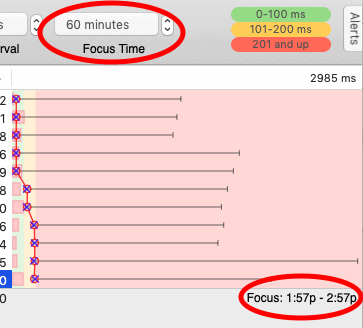 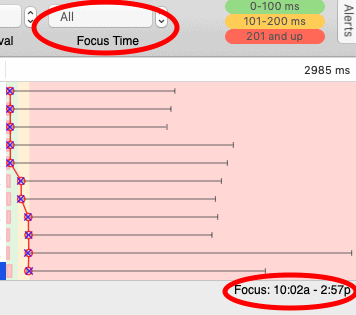 Screenshot: Trace Graph with Focus Time on “All”

While the Trace Graph gives you a summary of your data, the Timeline Graph provides detailed information for each hop over the trace period.

By default, only a Timeline Graph for the target host is displayed in intervals of 10 minutes. You can use the scrollbar at the bottom (or click and drag the graph) to look through the entire timeline.

You can add more timeline graphs for other hops by double-clicking on the hop in the Trace Graph:

You can also change the displayed interval by right-clicking anywhere on the timeline graph and choosing the new interval:

Along with the “Focus Time” setting, you can also double-click on any area of the Timeline Graph to focus on that area which will then affect the Trace Graph: 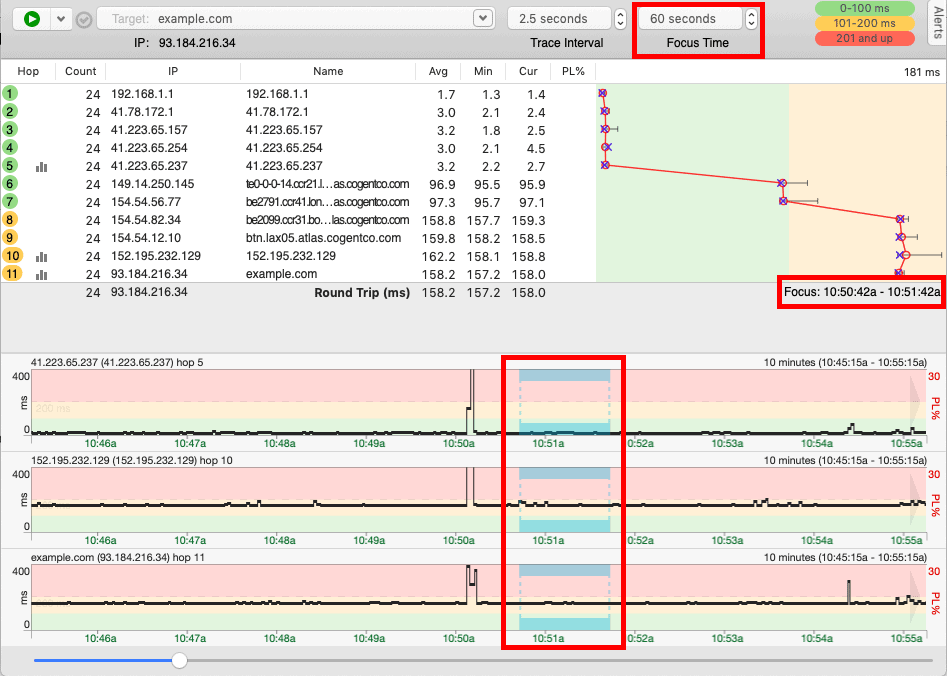 Making sense of the Data

Now that we have seen how to run a trace using PingPlotter and also the different parts of the interface, how do we make sense of all these data?

PingPlotter is a Tool that Presents Latency and Packet Loss data to the user and thereafter, the analysis is up to you to Troubleshoot your network to pinpoint the exact cause using the data they've provided.

Let us consider a Few Scenarios that PingPlotter can be used for:

The same way PingPlotter will not analyze data for you, it also can’t be used to solve any issues on the network. That part is still up to you.

However, one of the things I found most fascinating about PingPlotter is the level and amount of documentation available on their website.

For example, this article provides information about common network problems and how you can identify them from a PingPlotter trace. They even have options for specific issues such as Gaming, Streaming, and VoIP.

Having discussed the main capability of PingPlotter, let us now highlight some other features available on this tool. 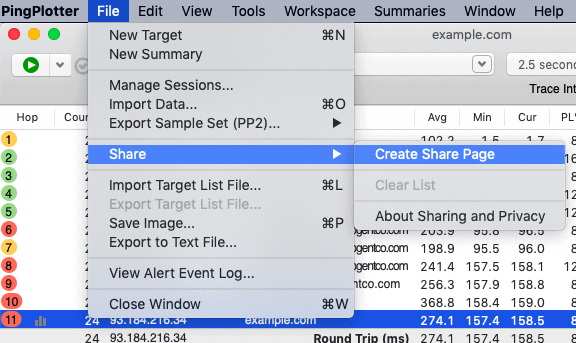 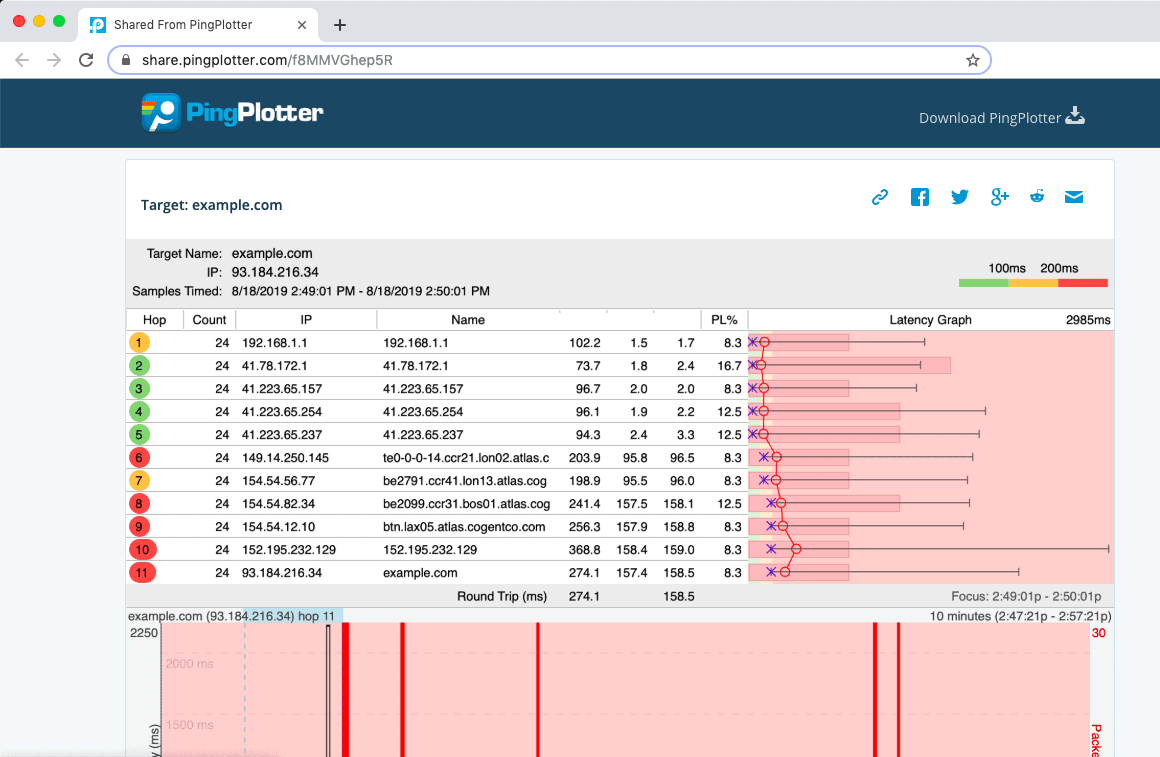 You can create various alerts for a target depending on a set of conditions. Alerts include logging to a file, playing a sound, sending an email, and so on.

Conditions include Network latency and packet loss over a certain time period, a route change along the path, and so on. 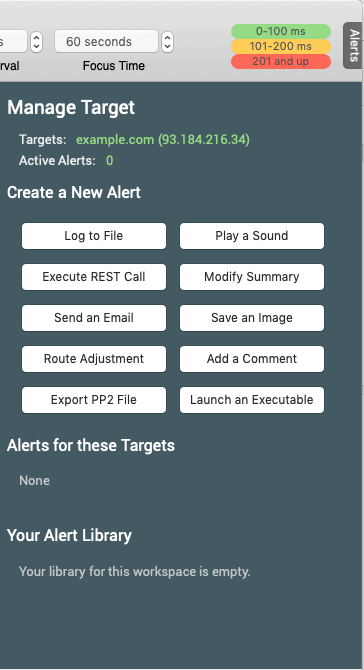 Scan for local devices on your network and add them as targets to be traced.

Note: It is not immediately clear if PingPlotter can discover devices on other subnets than the one on which PingPlotter is running. It seems not.

This allows you to deploy agents on remote machines (which can run their own traces) and manage all these agents from one central PingPlotter machine. This is only available on the Professional Edition and as at the time of this writing, some parts are still in development.

If you have ever heard about MTR, then you may be wondering, “How is PingPlotter different from MTR?” For those that don’t know what MTR is, it is a tool that combines the functionality of Ping and Traceroute into one.

You can use it to perform a one-off trace or to continuously monitor a target. It is free, supports various protocols including ICMP, TCP, and UDP, and is available for most operating systems including macOS and Windows.

To be honest, when comparing basic functionality, the major differences between PingPlotter and MTR is the sleek graphical user interface and the extended export capabilities that PingPlotter has to offer, as well as sharing reports online now! If you like the graphing feature of PingPlotter and insist on using MTR, with enough skills, you can probably configure MTR to send its data to another application which can then create graphs from that data. Otherwise, Stick to Pingplotter, as it has all these features built into it already!

So do you still need PingPlotter given a free alternative? I guess the answer depends on your skill level:

* PingPlotter has a Free edition but with limitations, limitations that do not exist on MTR.

Yes, you can run traces to multiple targets but once you start reaching a number (according to the PingPlotter guys, “hundreds or thousands”), then PingPlotter is not the solution for you.

PingPlotter is a Great way to Get insights into Network, Bandwidth and Latency/Jitter issues visually. You can quickly pinpoint issues on the Graph and start troubleshooting there.

This brings us to the end of this article where we have looked at PingPlotter. This tool combines the functionality of the ping and traceroute into one and displays data on nice graphs.

PingPlotter can be used to “see inside” a network to identify problems like congestion, packet loss, and even device unavailability with an Easy to Use Interface to Pinpoint issues Quickly! However, it should be noted that this tool does not analyze or resolve issues on the network and it is also not a network management system.

PingPlotter has a Excellent GUI and if your inclined to use Visual Graphs over command line numbers, then PingPlotter is a great tool to have in your Arsenal. All in all, we definitely see the upside in using this tool in both Home and Enterprise environments if you need to troubleshoot networks and latency issues.

If you want to test it in your own Network, they have Windows and Mac OSX versions available to download for Free – Premium license is also available via their Website as well!

Download PingPlotter Free from the Link Below To Get Started Today!