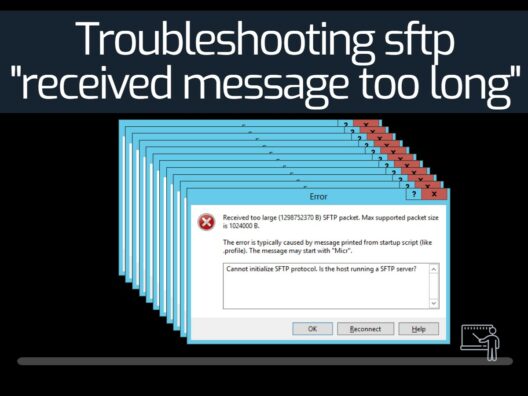 When attempting to transfer files using the SFTP protocol, you get the message “Received message too long … ” in your Linux or macOS machine.

The message means that the SFTP client received bad or unknown data from the SFTP server.

The primary cause and solution to the “SFTP Received message too long” error?

The following message appears when trying to access an SFTP server from a Linux-based SFTP client.

The “Received message too long” looks like this on a Linux machine:

The “Received too large SFTP package” looks like this on a Windows PC:

SFTP (and SCP2) are file transfer protocols based on the SSH process— they use the SSH session to “speak.”  SFTP and SCP2 are non-interactive protocols (non TTY). So any unique code on the server designed to output a message on an interactive login shell (SSH) will produce an SFTP or SCP error. For smooth and clear communication, either end (client and server) must only transmit relevant information on the actual protocol used at that moment (either SFTP or SCP).

The “SFTP received message too long” error is due to an “unclean” SSH session established by the SFTP server-side for various reasons like:

Refer to the below SSH message flow: 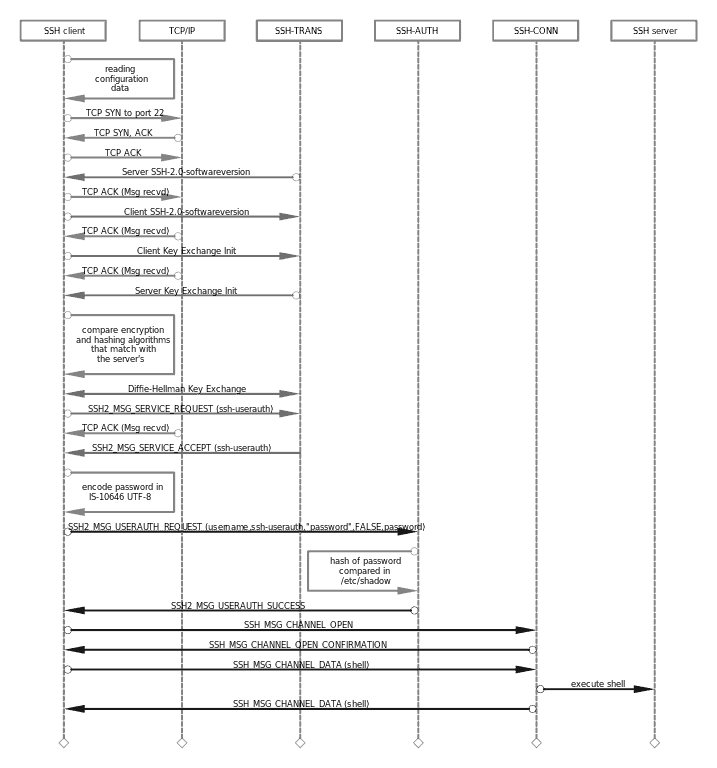 The SFTP client might be authenticating successfully, but once it tries to establish an SSH session over the startup shell, the server inserts these output text messages into the SFTP stream—and contaminates the message flow. This is why you should be able to SSH into the server, but not SFTP and SCP.

When the SFTP client receives this “strange” output from the SFTP server, it attempts to parse it as intended (as a standard SFTP message). But the client cannot interpret this message (which is more significant than usual), so it returns a “received message too long”.

The decimal value returned by the SFTP server on the error message has a meaning. It represents an ASCII value that can help you understand what the SFTP (or SCP) server is trying to say. 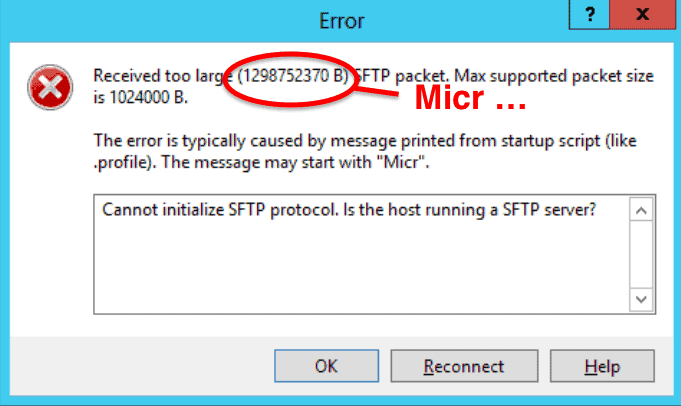 For example, the above error display is from Windows Secure Copy (WinSCP) Windows (Microsoft) program. The message shows the field “Micr,” a 32-bit message sent from the shell terminal.

How to translate this number

Fire up your programmer calculator and convert from Dec > Hex > ASCII. For instance: 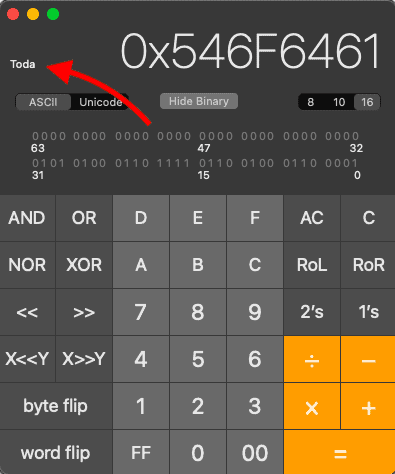 This will not solve your problem, but it will help you locate the statement causing the problem from the server’s side.

Once you know your keyword, for instance, “MFA” or “Toda”, you may have a clue. MFA, for example, could be due to a script using MFA to authenticate users via a message like “MFA verification code:”. Or another example, “Toda,” which stands for Today— a common MOTD statement.

In some cases, the bash login might send messages like “Please login as the user “admin” rather than the user “root” over the SSH terminal, resulting in the same “SFTP received message too long“. A quick workaround is using the correct user with the right profile.

Look for debug statements or conditional scripts that generate output from /etc/bashrc or /etc/profile.

You may also want to run your custom shell startup file while still allowing SFTP to go through.

To do this, you’ll need to configure your server to use the internal SFTP server directive so the end-user doesn’t use the standard shell to establish an SFTP connection.

Rather than commenting or removing a statement from the bash startup file, you can also configure the shell script for an early exit from SFTP, but keep reading the script.

An example of an early exit

The Linux-based SFTP server is likely using OpenSSH, an open-source collection of secure network utilities based on the SSH protocol. OpenSSH is the leading solution for running SSH on Linux distributions. It is accessible and highly versatile but requires advanced expertise and management.

The Best Alternatives to OpenSSH

Below are three solutions that provide SFTP server/client for Windows and Linux. All solutions also offer a great degree of access control, and one even includes a scripting framework for customizing your SFTP server. 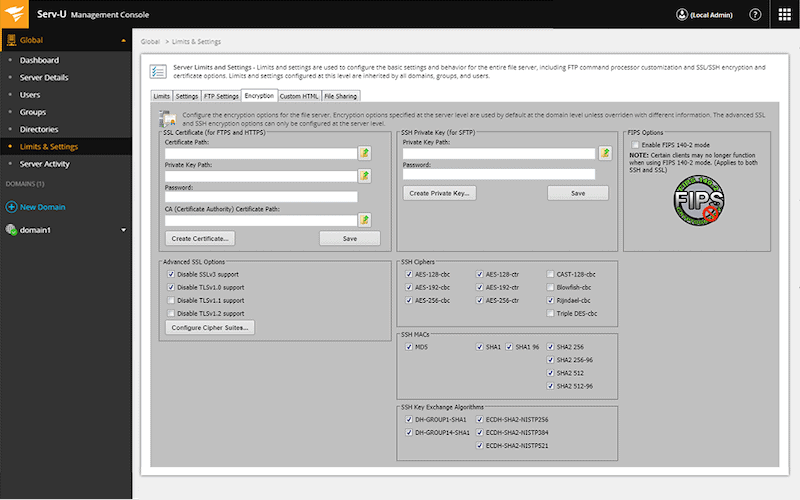 The Serv-U Managed File Transfer Server is a versatile and robust FTP solution. It supports a wide range of secure file sharing options including, SFTP, FTPS, FTP, and HTTP/S, over IPv4 or IPv6 networks. In addition, this software lets you remotely set up new domains, add users/groups, keep track of FTP sessions and logs, and most importantly, define access permissions. 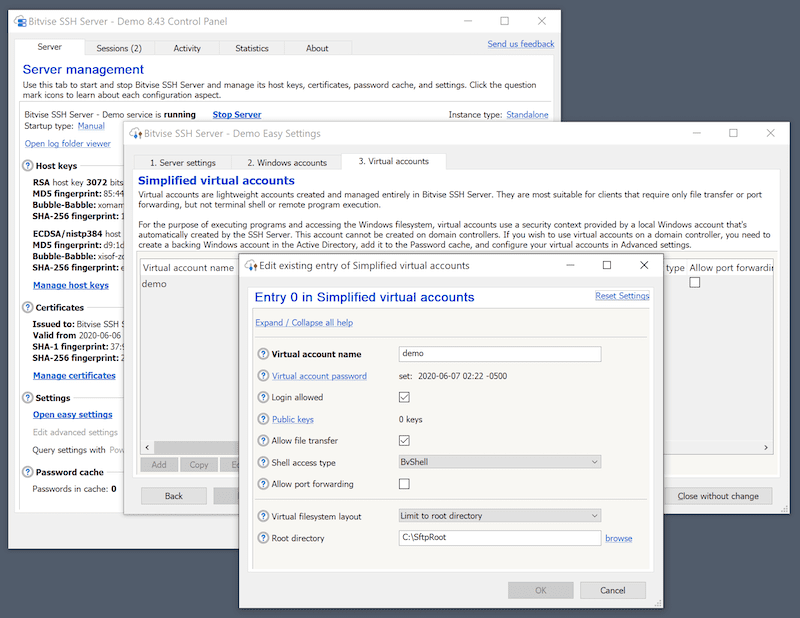 Bitvise is an SSH server solution (Bitvise SSH Server and SSH Client) for Windows environments (a great alternative to OpenSSH). The software includes secure file transfer (over SFTP, SCP, SSH, and even FTPS), terminal shell, and tunneling. In addition, the SFTP and SCP server supports a wide range of different clients.

Bitvise SSH Server is designed for Windows. As soon as it is installed, it will work immediately without additional configuration. From there, you can restrict or allow access to different user accounts and features. For example, the transfer clients can be limited to single or multiple directories. In addition, the terminal shell clients can be restricted to the same virtual filesystem only by pointing to the shell access type.

Download: Bitvise SSH Server is available to Download for a fully functional 30 days trial. But you can also choose the limited Bitvise SSH server personal edition free of charge.

If your customized shell script is what produced the “sftp received message too long,” with Syncplify.me, you can run your scripts. They provide a fully-featured scripting framework along with an event handling subsystem.

In this post, you learned the main reason and how to solve the “sftp received message too long” error. A statement or message appears in the server’s bash terminal, interrupting the normal flow of the SFTP protocol. The cause is mainly TTY messages from incorrect user access, roles, MOTD, debug, etc.

To allow the standard SFTP session without interruption and fix the “sftp received message too long” appoint the user (with permission) to the appropriate bash terminal or profile or remove any statements or echos with a comment.